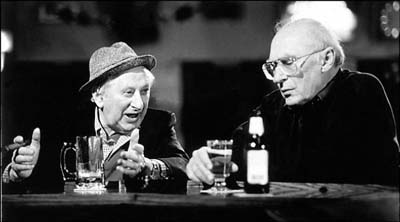 “What I bring to the interview is respect. The person recognizes that you respect them because you’re listening. Because you’re listening, they feel good about talking to you. When someone tells me a thing that happened, what do I feel inside? I want to get the story out. It’s for the person who reads it to have the feeling . . . In most cases the person I encounter is not a celebrity; rather the ordinary person. ‘Ordinary’ is a word I loathe. It has a patronizing air. I have come across ordinary people who have done extraordinary things.” — Studs Terkel (Touch and Go: A Memoir)

“I’ll never have granite countertops.” Was it a motto? A slogan? A badge of honor earned on the field of materialistically doing without? These thoughts churned through my head when I met Mike during happy hour at the local pub. Recently back from a trip to Rwanda where he’d spent six months volunteering as a construction manager for a boarding house for girls, Mike had definitely earned his cred in living without.

Rising early to drive an hour to the construction site, Mike described living a humble life of work, early dinner, drinks, enjoying a little cricket or rugby on television then calling it a day. Wash. Rinse. Repeat. Start again the next day.

Mike is fifty-one-years-old. Fortunate to have made wise investment decisions and a self-described workaholic seven days a week in his former working days, he is now retired. He lives a simple, but fulfilled life. He and I sat down to talk about what constitutes a good life, for him, and what he sees going on in the world around us with regard to others’ struggles during the recession we are (supposedly) emerging from.

His verdict: “We are bound.” Via commercials or what his parents would have called (and many today still call), “keeping up with the Joneses”, Mike feels that people today are constantly striving to emulate their peers. Driving the fancy car, getting a 400K mortgage they can’t afford, keeping the newest smartphone device at one’s fingertips 24/7— are all means of numbing oneself to the inner turmoil roiling around inside. As we looked around at the people sharing the countertop with us, five out of six stools supported a patron toying with their phone. Mike remarked, “That’s why I don’t have an iPhone. Because it distracts me from looking at what’s going on inside of me or conversing with the person on the stool next to me.”

I mentioned to Mike a statement I had heard on the radio a couple of weeks prior: “We are rich in communications, but poor in communication.” He liked this and thought it apropos to the point he was trying to make.

The fact that Mike worked in the construction business for twenty-five years and never succumbed to granite countertops spoke volumes to me. It’s a meaningless kitchen accoutrement, a lifeless slab, but in a field saturated with the newest and best of what the market has to offer, it represents the lure to continually upgrade.

As a person who worked in the real estate industry for over ten years, I often found myself guilty of making home comparisons. I would look at photos of the interiors of peoples’ kitchens and think about my own tattered, but vintage Carrera marble counters. I would wonder if I would be happier ripping them out and installing the newest granite or composite offerings. Like Mike, I had resisted urges like those and now sit financially on better footing than many of my peers. I don’t say this to boast, but I wondered aloud to Mike: what is it that separates people like he and I from our free-spending peers? How does one garner and hold a sense of thrift and frugality while living in an era drunk in decadence and overspending?

For Mike, the answer came quickly. He grew up listening to his parents quarrel over money. It was an ever-present topic of conversation in his household until Mike’s father passed away when Mike was twenty-one. His sister, who was eleven-years-old when their father passed, feels no sense of thrift in her life.

Clearly it’s not just nature. Mike and I tried to tease out the differences between he and his sister in regard to materialism and debt. She works in the medical industry earning six figures. Sadly, her school debt is as large as her annual income and Mike believes it is this vast debt that keeps his sister perpetually feeling underwater. In his view, it’s like she can never get on top of things financially and thus advance her life. She is education rich, but life poor.

When Mike sits down with his sister to tackle her budget and talk about a short-term financial trajectory, she balks at cutting back on her expenses for the long-term advantage of being debt-free. She is a renter. She doesn’t foresee purchasing her own home because sadly, that would add further debt to her already burdened financial load. In a housing economy like the current one, perhaps it’s wise she is taking a “wait and see” approach to home buying. Like thousands of others that are straddling the fence, weighing job uncertainty and the future, this might just make sense.

According to politicians, the recession is over. It seems that many Americans have missed the memo. High unemployment, a depressed housing economy, trillions of dollars owed in government debt, and stagnant retail numbers all indicate that we are in the midst of a very large problem with light at the end of the tunnel not yet visible.

What I often wonder is what is this current “economic crisis” teaching us? How is it altering habits and cultural mores? If lessons are to be learned, how long will they stick with us once the worst has passed? Decades after the 1929 Great Depression, many adults and children that lived through it took away a sense of thrift that influenced them throughout their lives. This recent downturn timed its grand entrance just as vestiges of twentieth century frugality exited quietly out the back door with the passing away of Depression-era survivors.

As we navigate and hopefully, take something away from this current situation, what advice will we be passing down to future generations when the present becomes the history of “I remember when…”?

I enjoyed my unexpected conversation with Mike and look forward to sharing more countertop chit-chat with you. As always, thanks for reading.